Unfortunately, we use the term "framing" to refer to two different things.  Most commonly, the term is used to mean putting your photograph in a frame to hang on your wall.  But another, equally important use of the term refers to an aspect of designing your photograph.  Framing refers simply to the arrangement of outside visual elements to add depth or context to your subject.

In the photograph to the left, taken at Swallow Falls State Park, the trees frame the composition of the staircase.  The main compositional element is the S-curve formed by the staircase, but the trees add  framing or context to the composition.  In the photograph below, I had to crop the photograph significantly so that the Yellow-Crowned Night Heron would be large enough in the frame to be interesting.  But if I cropped too severely, the bird would look unnatural.  After all, herons don't fly like that; they only look like that when they are landing, so I decided to frame the shot by including where he was planning to land in the framing of the shot. 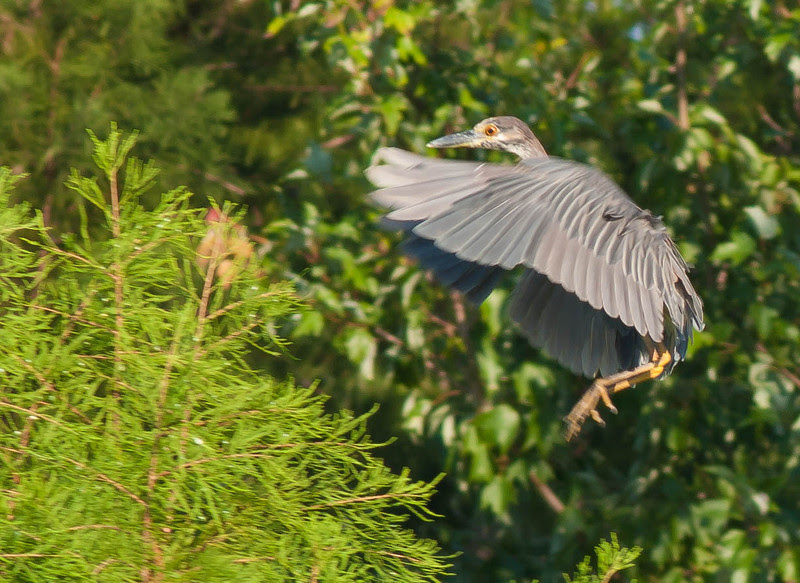 Generally speaking, I use the term "composition" to refer to what you do to design your photograph before you trip the shutter on your camera to design your photograph, and framing is one aspect composition.  But let's face it. Sometimes you just need that longer lens; you simply can't zoom in enough to frame the shot the way you want.  Your only recourse is to frame the shot in your computer using the crop tool in software.  But keep in mind that zooming and cropping are two different things.  Zooming in changes the relationship between the foreground and background of your image; cropping does not.  Cropping simply cuts out part of your image that you consider to be less important to your composition.
Labels: composition framing