You've probably seen photographs that catch your attention, and you wonder why all the elements of the photograph are "where they ought to be."  It's odd to say that, since in nature things simply are where they are, but in a photograph, this is what we call balance.  The photographer has arranged all the visual elements in the image so that they seem like they're where they're supposed to be.

When we think of balance, we often think of symmetry, where one half of the image is mirrored by the other half.  As we discuss in the posts on the rule of thirds, this style of composition often divides the frame into two halves and it therefore splits the attention of the viewer.  A better way to think of balance is in terms of what you may remember from high school physics, or at least from seesaws in the playground growing up. 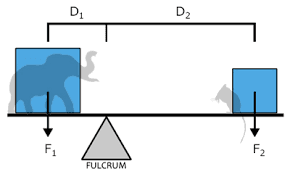 In the above diagram, a heavy object has to balance a lighter object on the line by moving closer to the fulcrum.  When you were a kid, your father had to sit closer to the center of the seesaw to balance out your weight at the end of the other side of the see saw.  So while diagram isn't symmetrical, it's still "balanced."  Objects "weigh more" the further removed they are from the fulcrum.

In photography,  images are often made up of contrasting pairs: light/dark, large/small, filled space/empty space, smooth/rough, etc.  The presence of one visual element somewhere in the frame can be balanced out by an element somewhere else.

In the the photograph above, the tree is darker and the background is generally lighter.  But rather than putting the darker tree in the center, I put it off to the left in the frame, where it has more "weight."  Also notice in the photograph to the right that the top left is lighter than the bottom right.  The fallen trees in the foreground lead you from the darker area to the lighter area, but rather than the fallen trees meeting the upright trees in the center, they meet towards the upper left part of the frame.

The balance in both these compositions is designed to lead they eye into the frame, rather than your attention being split into two halves of a photograph.
Labels: balance composition